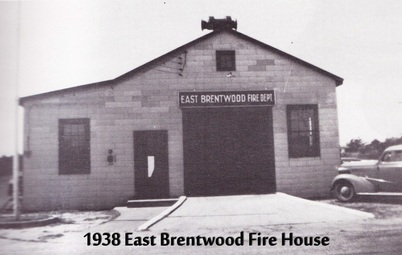 The original Brentwood inherited the traditions and geographical location of the colony of Modern Times. When a branch post office was established in the Pilgrim State Hospital in 1940, the area became known as West Brentwood. The area of East Brentwood arose from the acreage lying between the Brentwood line on the west, Caleb's Path on the east, Suffolk Avenue on the south, and Motor Parkway on the north. All of the property in the East Brentwood Fire District was originally owned by the Newspaper the Brooklyn Eagle. The property was then sold to Cadman H. Fredericks. (The Brooklyn Eagle Newspaper is still in business today).
East Brentwood's first residences, during the Great Depression, were covered basements, shacks, and small houses. The residents were located within a vast scrub oak wilderness. In time, improvements in infrastructure meant the value of homes greatly increased and, in turn, loans increased.
The Taxpayers Association of Motor Parkway Acreage (TAMPA) was formed May 28, 1934. It was founded by non-partisan group of residents, home owners, and tax payers for the protection, improvement, and benefit of their mutual civic interests; to promote friendship and goodwill among the residents of the district; and to further the cultural and intellectual interests of the addition. Special emphasis was to be placed upon the obtaining of good roads, street lights, and other public improvements. In 1936, the one acre lot No. 1928 at the southwest corner of Fulton Street and Nostrand Avenue had been donated by Mr. Fredericks to the East Brentwood Fire Company Inc. for the construction of a fire house. TAMPA Fire Patrol only lasted two years until it was chartered in 1938. The original 1938 Wood Fire House was a barn on Pecks Farm, on Peck Avenue in Brentwood south of Long Island Avenue. It was moved to the corner of Nostrand Avenue and Fulton Street - our current location.
Since then, East Brentwood fire house underwent transformations which reflected the needs of the growing community. Dedicated April 11, 1953, a 3 bay truck house expanded the original fire house at a cost of $20,000. In 1964, work was done to extend the meeting room to accommodate members and the community. Cost of upgrade: $50,000.
The establishment of the East Brentwood Fire Department is the result of relentless hard work to keep the belief of "protection of life and property" operative. The relationship between the department and community had been crucial in determining success. The same holds true to this day and will continue for future generations.  - Written by Marvin Bonilla 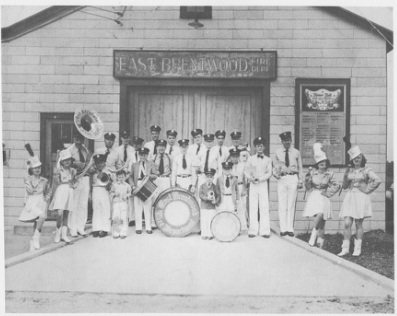